Some cities capture your heart instantly; Salerno was not one of those cities. I think this had everything to do with our expectations of what we would be getting. Emily and I were expecting something like Cinque Terre, but it was much more condensed, with a bit of a sanitation issue. But, we still had an amazing time, and I still think this city is worth exploring.

We started our day in Atina, kissing our new-found Italian friends on both cheeks before leaving. They told us they hoped to see us again in Italy, and I can’t wait to take them up on that offer. Alessio ran in and hugged us, completely melting our hearts yet again. Then, it was back in the car to drive to Reggia Caserta (a King’s Palace similar to Versailles). Upon arrival, we realized that it was actually closed, but we were unbothered. We hopped back into the car and headed for Salerno with a beach day in mind. We were a little surprised when we reached the city, not really sure what to make of it. We spent some time driving in circles, trying to find our airbnb, and we were thrilled when we found it was ON THE FIRST FLOOR. Hallelujah.

We quickly grabbed our suits and made for the beach. We stopped for pizza (that I actually liked) on the way. At a glance, it looked as though the beach was dirt, which was not the most impressive. Once we actually stepped on the beach, though, we found that it was actually black sand! I’ve never seen a black sand beach, so this was really cool. Gin and Elvio relaxed on the beach, reading and napping, while Emily and I jumped in the water to play in the waves. Childish? Maybe. But will that ever stop me? Of course not. The water was super salty, so floating was super easy. The waves were also pretty big, so on top of being fun, it was a bit of a workout. When we were finally ready to be done, Emily decided to swim in on her stomach… not the best idea. A wave crashed over her head and pulled her back out, leaving me laughing like crazy.

After the beach we headed back to the airbnb to shower before meeting up with Elvio’s friend, Fernando. He is quite the character. He’s super knowledgeable about the history, but also super eccentric. He certainly kept us entertained. He took us up to the Salerno Castle, where we got some amazing views of the city. We also got to walk all the way around the outside of it. The views were spectacular. Soldiers actually used the castle during WWII. The Etruscans actually built the castle (or at least its foundation) so it’s incredibly old.

I found a cat, of course 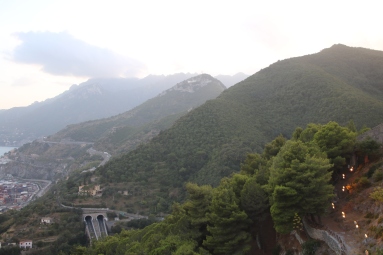 One of the gaps where soldiers would shoot 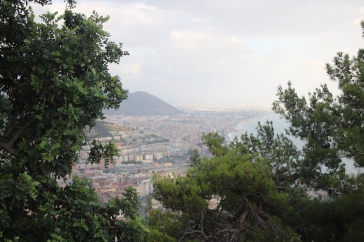 We had a really interesting experience when we left the trail. We reached the gate to leave, and found it locked! We had to climb around the gate just to get to the parking lot, and once we were in the lot, we found that our cars were locked in. Apparently the park had closed while we were exploring. But who locks a park when there are obviously still people inside?! Italians, apparently. Another couple was stuck inside with us, and they eventually found a way to open the gate, letting all of us out.

We drove back to our airbnb, parked, and then made our way to the old town for dinner. This part of town restored hope for Salerno. It was cute, with no garbage, and lots of Italian-esque shops. We ate at a little place that was full of people, but the food was so good it was worth the crowding. It wasn’t quite traditional Italian food, but it was delicious anyways. The best part? The chocolate mousse for dessert. YUM. Our walk back to the airbnb took forever because Elvio and Fernando were so slow. But, it was a beautiful night (not too hot, for once) so we didn’t mind. It was about this time that Emily and I started to miss home, especially those little sisters of ours. 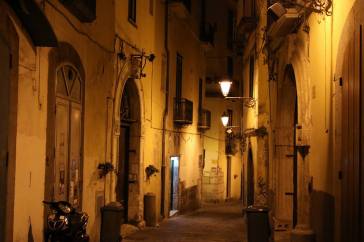 We hit the hay right away, excited to explore Paestum and Pompeii the next day.